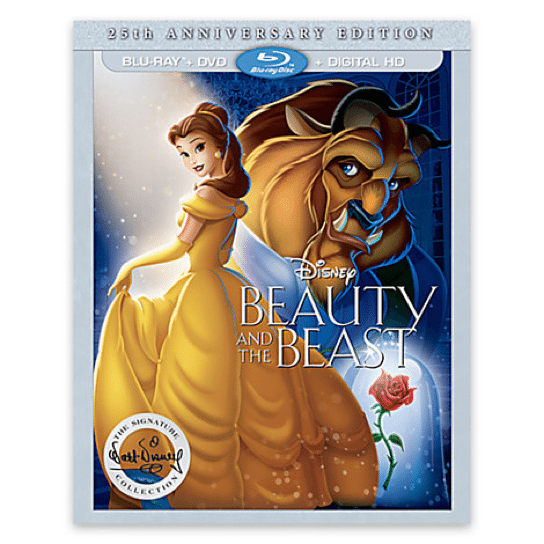 I got an advanced copy of Beauty and the Beast so last night we had a family movie night and watched the movie together. It was the first time my daughter had seen the movie even though Belle is her favorite princess. We had also been to Disney and saw the live action performance of the movie.

I had not seen the movie in a while and I can tell you that I loved it as much as the first time I watched it. It’s such a good story and the animation is amazing! I can’t believe it has been 25 years since it has been released!

In honor of the 25th anniversary of Beauty and the Beast – you will be able to purchase all the Disney Princess movies all at the same time!  On Sept. 6, the beloved animated classic featuring Belle and Beast was released as part of The Walt Disney Signature Collection and in celebration of the event, for thefirst time ever, all 11 Disney Princess films are being made available to bring home at the same time, Sept. 6 – Oct. 17.

Beauty and the Beast is available now for Digital Download and it will be available on Blu-ray September 20.

Disney’s epic fairy tale Beauty and the Beast returns to Blu-ray with the release of Beauty and the Beast The 25thAnniversary Edition, the original animated classic.  The all-star voice cast features Robby Benson as Beast and Paige O’Hara as Belle, along with the castle’s enchanted staff including Jerry Orbach as Lumiere, David Ogden Stiers as Cogsworth, Angela Lansbury as Mrs. Potts, and they’re all just as magical as you remember them!

There is also a host of all-new bonus extras including a rare opportunity to gather around the piano with some of Disney’s greatest composers, including Alan Menken (“Beauty and the Beast,” “Aladdin”), Stephen Schwartz (“TheHunchback of Notre Dame,” “Pocahontas”), Kristen Anderson-Lopez (“Frozen,” Disney’s upcoming “Gigantic”), Robert Lopez (“Frozen,” Disney’s upcoming “Gigantic”) and Lin-Manuel Miranda (Disney’s upcoming “Moana”) as they sing and share how they’ve personally been inspired by the film’s award-winning music; a look at how Walt Disney himself sought to adapt this famous fairytale; a nostalgic look back with Paige O’Hara, the voice of Belle; behind-the-scenes access into the recording booth with the cast; and a sneak peek at Disney’s upcoming live-action re-telling of “Beautyand the Beast,” arriving in theaters in 2017.

There are hours of bonus features for you to enjoy. My favorite was the preview of the live action movie of Beauty and the Beast that will be released in March 2017. It’s going to be spectacular!