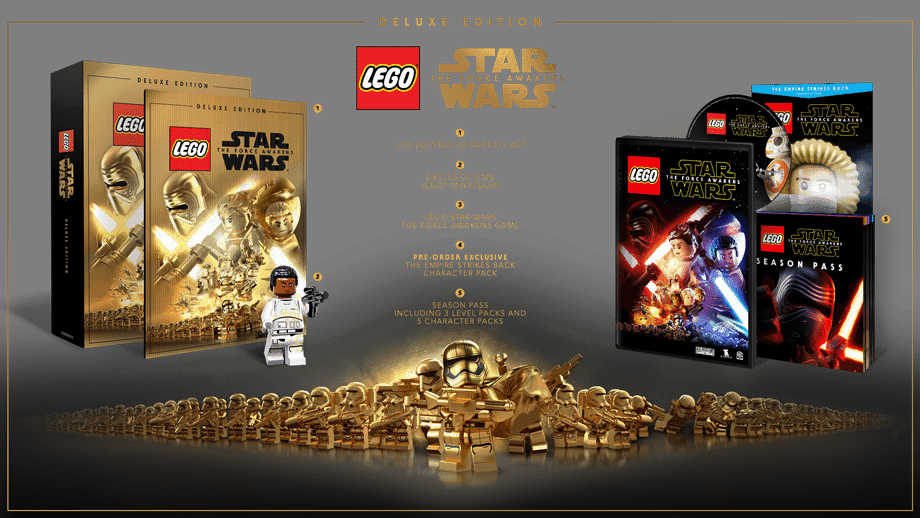 Good news for those who have LEGO® Star Wars™: The Force Awakens™! There is some new downloadable content for your game on the Xbox One and PS4.

The Poe’s Quest for Survival Level Pack extends the adventure with a previously untold story that can only be played in LEGO Star Wars: The Force Awakens. Fans can now experience Poe Dameron’s journey back to the Resistance base after his daring escape from the First Order. While stranded on Jakku, Poe must locate a ship to get off the desert planet in an effort to find his way home. Playable characters and vehicles include: Naka Iit, Ohn Gos, Poe Dameron (Jakku), Strus Clan Leader, Strus Clan Raider, Strus Clan Speeder (Full-size Vehicle) and Strus Clan Speeder (Microfighter Vehicle).

Players can currently purchase the LEGO Star Wars: The Force Awakens Deluxe Edition on PlayStation 4 and Xbox One, which includes the main game and Season Pass—the perfect holiday gift for any Star Wars™ fan.

LEGO Star Wars: The Force Awakens marks the triumphant return of the No. 1 LEGO® videogame franchise, immersing fans in the new Star Wars adventure like never before. Players can relive the epic action from the blockbuster film in a way that only LEGO can offer, featuring storylines from Star Wars™: The Force Awakens™, retold through the clever and witty LEGO lens. The game also features playable content exploring previously untold adventures set in the time leading up to Star Wars: The Force Awakens, providing deeper insights into the film’s characters and most memorable moments.