This is a collaborative post. All opinions are my own. 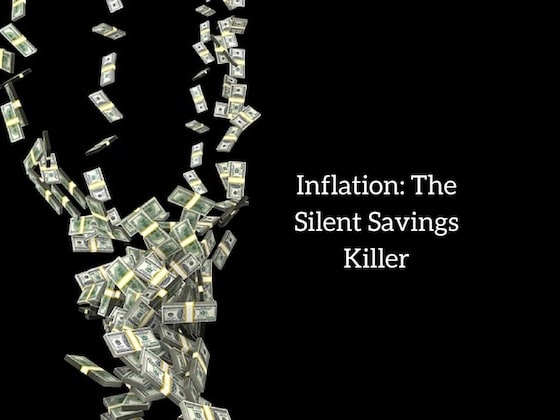 The best way to keep your money safe is to put it in the bank, surely? Most people think that if you put your money in the bank and don’t touch it, it will only grow in value. If you’re lucky that will happen, but for the most part, it will go down in value. Why you ask? Because of inflation, the silent savings killer. The reason that most people don’t realize their money is depreciating in value is that it does appear to be growing. For example, if you put $1000 in your account at 1% interest, you’ll have $1010 by the end of the year. However, if inflation is at 2% the same goods that cost you $1000 last year will now cost you $1020, so in real terms, your money is actually worth less. This is a simplified example of course, but whenever inflation is higher than your interest rate, you’re burning money.

At the moment, inflation levels are fairly low at 1.7%, so people aren’t so worried about it. But what they don’t realize is that inflation reached levels of 14.76% in 1980, and it could happen again. Imagine how much value your money would be losing with inflation levels that high. When you’re trying to save for retirement, losing that value every year is catastrophic. But fear not, there are ways that you can combat the negative effects of inflation and make sure that your savings are actually growing in real terms.

Ask For A Payrise

The easiest way to offset the effects of inflation is to increase your wages in line with the inflation. Employers are reluctant to give a pay rise a lot of the time, but to them, it’s only a small amount. You don’t need to go in demanding a massive increase, but you should speak to your boss about increasing your salary as inflation goes up. When you start a new job, employers usually have the means to increase their starting offer by around 10%, but most people never negotiate. If you negotiate a 10% increase and inflation is going up at around 3% every year, then you’re protected for the first three years straight away.

Instead of just putting it in the bank and hoping that inflation will be low enough that you’ll see growth, why not take active steps to increase the value of your savings? Companies like wealthtreefinancial.com can give you great advice on investments that are low risk but still see good returns. A lot of financial managers will often take your money and put it into higher risk investments that could end up failing and sending you back to square one. Going with a company that focuses on safe investments ensures that you’re seeing your savings grow without having to worry about losing it all.

Hedge funds are always a sensible investment because instead of taking one person’s money and investing it, they pool the money from lots of people and spread it over a variety of investments, paying each benefactor a portion of the profits. That means that your risk is massively reduced because if one or two of those investments fail, you’re still making a profit overall.

One of the best ways to invest your money is S and P 500 Index funds. It is a stock market index that has seen an average annual return of 11.25% since it was created in 1928. This is far higher than most of the other similar funds that are around. It is also what is known as a passive index fund, so it doesn’t have a financial manager that actively moves the money around, risking losses. In an active fund, the running costs are higher because you need to pay for the services of a financial manager but the S and P 500 has relatively low costs, so the returns you get are higher.

Bringing in extra income is a brilliant way to make sure that your bank balance is always one step ahead of inflation. Investing in real estate is one of the best ways to do this. It’ll take a large initial investment, but if you’ve got the money there, it’ll ensure that you’re always bringing in enough money to offset the effects of inflation. Renting out a property gives you a regular income that will help you to build your savings rather than just leaving them in the bank and watching them stagnate.

Move Your Money Around

Banks are always changing the deals that they offer on savings accounts, so if you stick with one, you might not be getting the best interest rate that you can. The interest rate on your current bank account might be lower than the rate of inflation so you’ll be losing money. However, there might be another account that has an interest rate that is higher than the rate of inflation. If you keep up to date with the deals and offers that are out there and move your savings around to make sure you’re always getting the best deal, you can get the most out of your savings.

Most people tend to set up a standing order that pays into their savings account every month. This is a sensible way of making contributions to your savings account, but it means that people often forget about how much they’re putting in. When inflation starts to increase, you should also be increasing the contributions that you’re making to your savings. Always keeping the contributions the same will only lose you money. It’s a good practice to adjust your contributions every year in line with inflation. Some banks also offer automatic increases in line with inflation which is a good way of keeping on top of it even if you forget about it.

If you want to increase your savings, you can’t just sit back and wait for them to grow. Inflation will depreciate their value year on year if you don’t do anything about it. You need to actively combat the silent savings killer to make sure that your savings are always growing.

inflation really is a silent killer. it's painful to think that saving money is necessary, but it doesn't go as far as it used to. Always a good idea to invest it safely to keep ahead of rising costs.