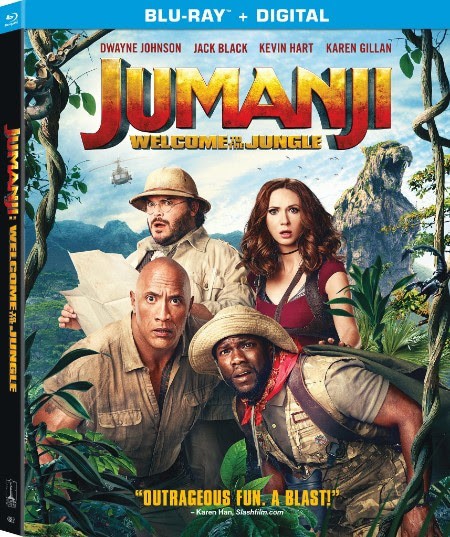 Are you ready to own JUMANJI: WELCOME TO THE JUNGLE? Good new…I have the official release dates for you!

There are a ton of special features including a Gag Reel & Five Behind-the-Scenes Featurettes. Plus for the First Time Ever, the Home Entertainment Packaging Will Trigger an AR Experience!

About JUMANJI: WELCOME TO THE JUNGLE

When four high-school kids discover an old video game console with a game they’ve never heard of–Jumanji–they are immediately drawn into the game’s jungle setting, literally becoming the avatars they chose: gamer Spencer becomes a brawny adventurer (Dwayne Johnson); football jock Fridge loses (in his words) “the top two feet of his body” and becomes an Einstein (Kevin Hart); popular girl Bethany becomes a middle-aged male professor (Jack Black); and wallflower Martha becomes a badass warrior (Karen Gillan). What they discover is that you don’t just play Jumanji–you must survive it. To beat the game and return to the real world, they’ll have to go on the most dangerous adventure of their lives, discover what Alan Parrish left 20 years ago, and change the way they think about themselves–or they’ll be stuck in the game forever …

Based on the book by Chris Van Allsburg, JUMANJI: WELCOME TO THE JUNGLE was directed by Jake Kasdan from a screen story by Chris McKenna and screenplay by Chris McKenna & Erik Sommers and Scott Rosenberg & Jeff Pinkner. The film was produced by Matt Tolmach and William Teitler and executive produced by David Householter, Jake Kasdan, Dwayne Johnson, Dany Garcia, Ted Field and Mike Weber.

This movie is so funny. I saw it in theater three times and will own it on blu-ray.

I'm glad it's coming out so soon, I thought it would be later. I can't wait to see it.

I can't wait to get this for the girls. They will love it. I will too.